I am in Lisbon

I am on my summer break and it didn’t take me long to get to Lisbon, Portugal. I flew from Canary Islands and did not know what to expect. I’ve only been here 3.5 days but slowly I am forming a picture.

Approaching Lisbon I saw red-bricked roofs of the houses and many hills and it instantly reminded me of Vilnius, Lithuania. However right at the airport waiting for the taxi pick-up I noticed multi ethnic groups waiting and so my impression changed towards either a) yet another Western European city b) post-colonial capital. Of course it is a bit of both, but I am currently thinking it’s more b) than a). 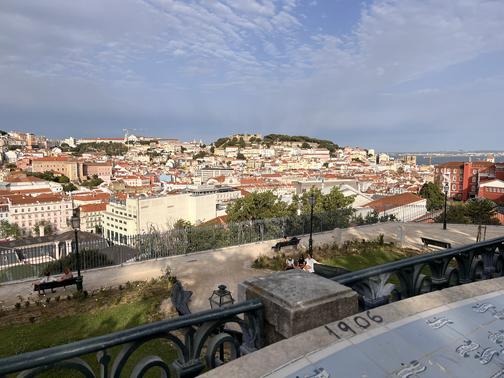 Greeted by the transit person who was responsible for getting me to the hotel (most hotel bookings here include a taxi transfer), I found out she’s Brazilian and so is the taxi driver. Took her a few minutes of knowing me to complain about the Portuguese: she said she moved from Porto to Lisbon because Portuguese there “don’t like Brazilians much”. Woaaa. Felt like getting to know a group of good friends who instantly started gossiping about one another.

Checking in at the hotel the receptionist spoke some Spanish to me for about 1 minute and then he just switched to English without an explanation. The other staff stood by timidly and didn’t say much after the initial “hola”. From future interactions with the locals I am getting the impression that Portuguese are much more reserved and timid compared to southern Spanish. Why am I comparing them to Spanish anyway? 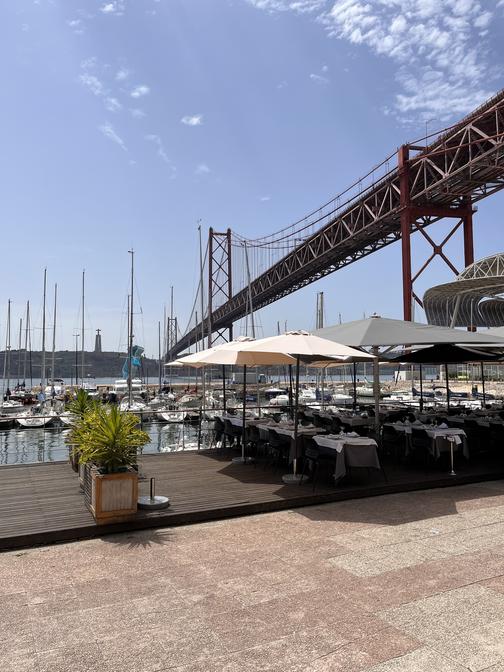 Before coming here I used to think of Portugal as some kind of Spanish little brother. And it is not - as simple as that. The easiest way to offend everyone in this country is to say ‘gracias’ instead of ‘obligado’. Portugal has a distinct national identity. Apart from a brief period of the union with Castilla they remained largely independent. Even the union was never a conquest by the Spanish - it happened because of some blood ties of the royal families.

The similarities I see are more to do with the climate: dinners are very late, people never seem to be in a rush. Some ingredients and dishes are in common: like the octopus. Although that’s probably because of the shared cuisine with their Northern neighbour: Galicia. The languages don’t sound the same at all. In fact many people say the Portuguese phonetically resemble some kind of Slavic language. And to my ear this is completely true. The first day I kept wondering why everyone is speaking Polish around here. Reasons for the similarity are coincidental: Slavic & Portuguese are stress-timed languages and feature many sounds like sh/zh and other constant clusters that make them sounds somewhat similar especially if are not paying much attention.

However, there is one similarity in (slang) Spanish and Portuguese languages: the frequency of the AO diphthong. I always wondered why Maluma sings ‘ya que estoy tomA’O’ even though he’s Colombian. I currently suspect this A’O thing is a Brazilian influence on the Latin Spanish to make it sound cool. Coincidently same A’O diphthong can be heard in the Galician accent, language most similar to Portuguese. Satisfying when all pieces fit.

I digressed. Lisbon itself turned out be smaller in the population size than I thought it would be. Hosting just 500 thousand inhabitants - it is only 30% bigger than the city where I reside, Las Palmas. Yet Las Palmas feels like a province whilst Lisbon, or should I say Lisboa, is definitely a capital. The density of beautiful buildings in the city shows that it has a wealthy history; it also has a metro system. I guess 500,000 figure is deceptive, as their metropolitan population is much much bigger than Las Palmas. Whilst I enjoy the beautiful buildings that make up the city center, due to the hot climate at the moment my sight-seeing abilities are limited. What I absolutely love about the city is the abundance of various parks and squares for people to hide from the scorching sun. Here, in the shade, I spend a lot of time these days reading my e-reader and thinking about what to write. 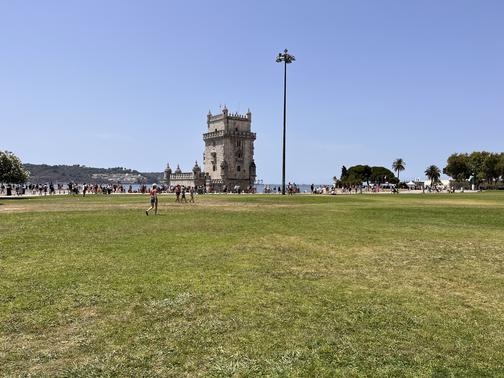 I am staying here at a very modest hotel, especially given its price. There’s no swimming pool, my room is tiny, nor do I agree with their liberal use of the word gym. Sure, a room with a few kettlebells is a gym. The city centre is full of hotels. So what brings all the people then? For me it’s a combination of factors. Lisbon has become popular with remote workers, especially crypto-bros because of the taxation. It’s a lively city with a good climate and prices still lower than other European capitals. I see the appeal. So far I found myself much more fascinated with the history of the place and the affinity with Brazil. As I keep exploring the city more I see them tourists idly wondering around downtown, drinking cocktails straight from the pineapple. Doesn’t feel that different to other popular destinations. But as a motorized rickshaw pass by I hear the girls cheerfully singing

a very catchy Brazilian song I picked up from hanging out with Latin musicians. 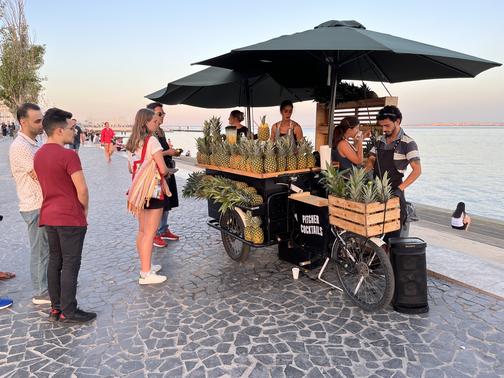 I keep finding it incredible that all the way back in 1500’s Portuguese sailors colonised Brazil. Later they colonised other places in Africa and Asia. No wonder it took them a long time to swallow their pride and give up their territories. They lost thousands of people too in 1961-1974 still trying to hold onto their last colonies. Ultimately they suffered a defeat. Now that the nation is cured of its pride and they have become a modern modest democracy they’ve discovered the problem of declining population. Rich westerners have better things to do than to have kids. Appears current solution to the problem is to import people from the ex colonies. And so there are Angolian, Mozambican and, of course, Brazilian restaurants here. So far I’ve only tried one Brazilian dish (moqueca de peixe), and it was a very rich explosion of exotic, spicy flavours. After having the incredible dish and being exposed to the catchy music I must admit it is tempting to pick up some basic Portuguese and travel through Brazil as my next journey. 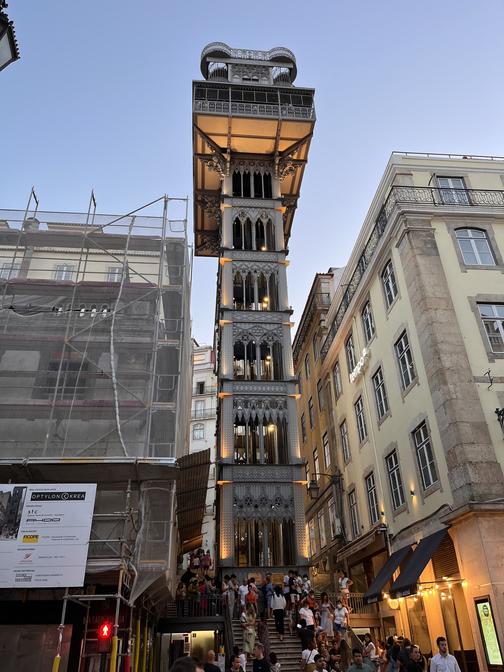 And so where am I, in the end? I am in a modern Western capital with a distinct culture and a flavour of colonial past. Welcome to Lisboa, welcome to not-Spain! 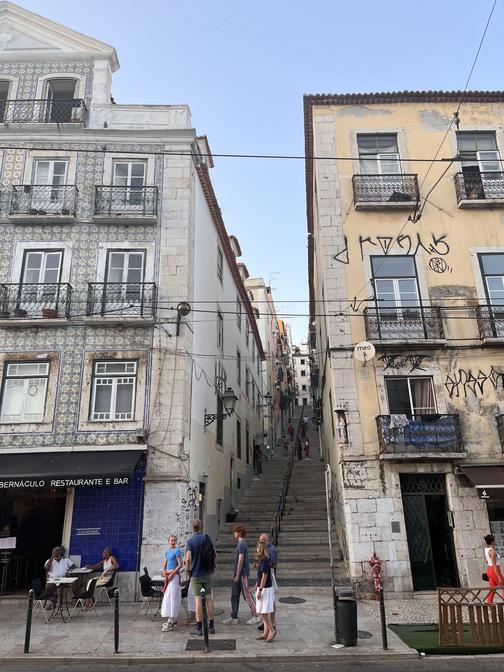