This weekend I got round watching lessons 4 and 5 of the “Introduction to Machine Learning for Coders” course by fast.ai lead by Jeremy Howard and was impressed to the point of breaking my 478 days long writer’s block.

After having worked on the problem of fitting and interpreting Random Forests for almost 2 years it’s really interesting to see another experienced data scientist revealing his “bag of tricks”.

In this blog post I will write what I learned from the videos.

Using the code below

One can produce the following graph to examine which features are the most correlated: 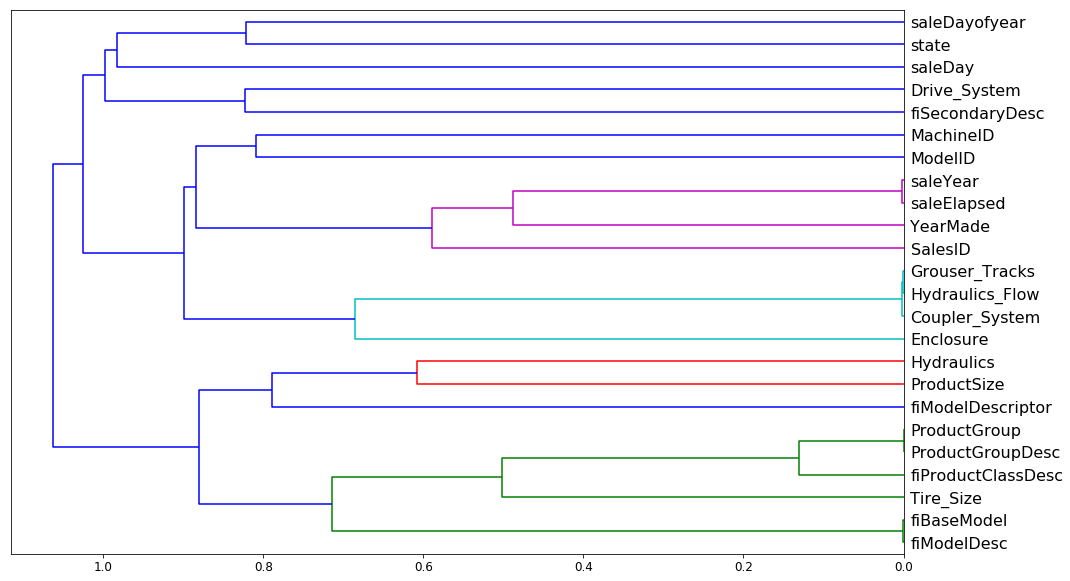 There are two new things for me: 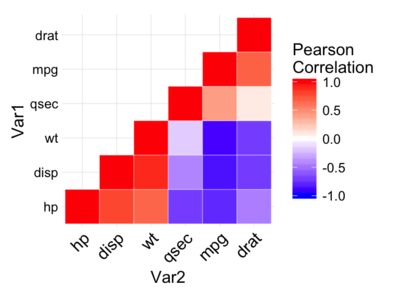 The resulting plot looks more informative and easier to read than a simple heatmap: variables that are joined together later are most correlated (e.g. SaleYear and SaleElapsed are very correlated whilst SaleYear and TireSize are not correlated).

When sanity checking a trained model it’s common to ask what the effect of varying a particular feature is. For example, time since registration is typically a significant feature in detecting fraudulent accounts: newly registered accounts are more risky. Thus you would hope that holding everything else constant whilst reducing the value of timeSinceRegistered should yield higher prediction probabilities of an account being fraudulent. Turns out there’s a library that does just that. Using PDPbox one can make so-called Individual Conditional Expectation (ICE) plots: 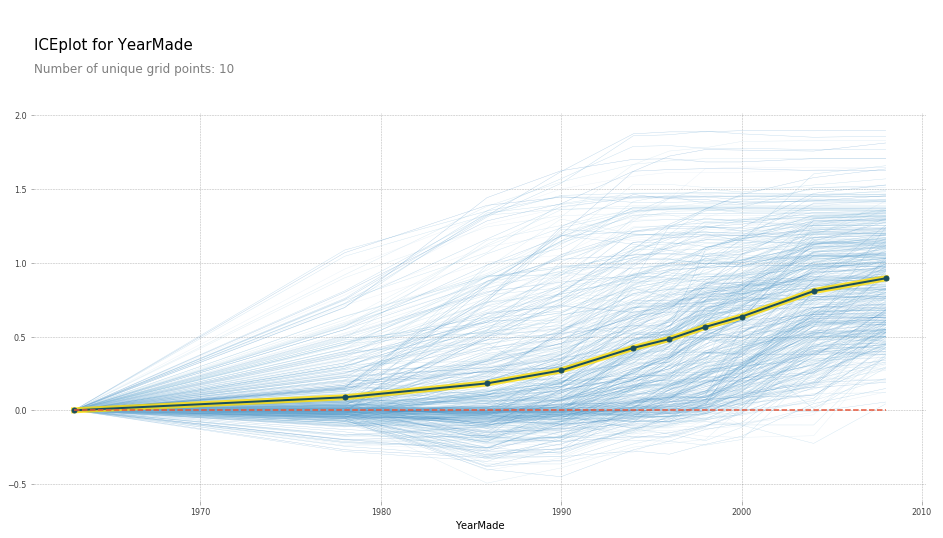 here each line represents a row in the dataset and the yellow line is the mean prediction. We see that with YearMade increasing the predictions tend to increase. Since they are too many rows drawn on the plot, we can cluster rows and see that they are distinct patterns of how the target increases: 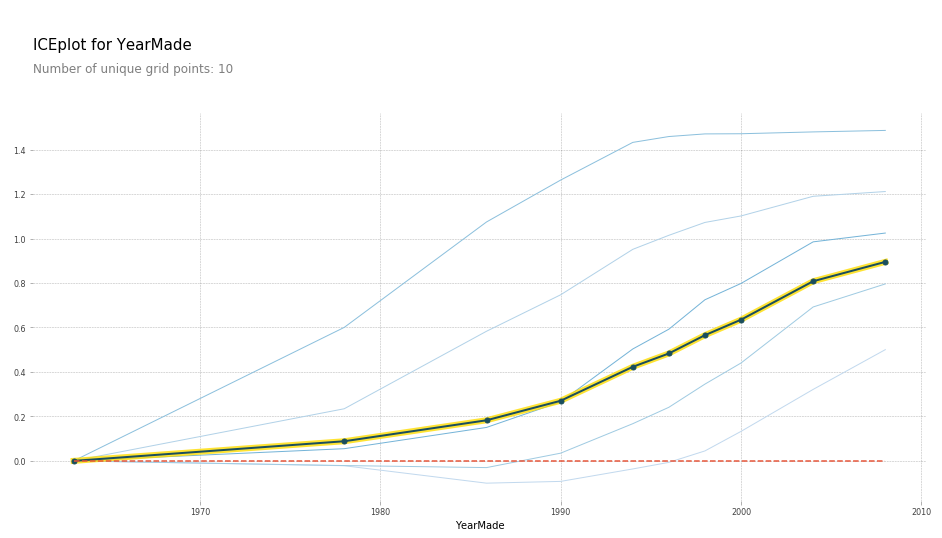 What’s new for me:

Looks like Jeremy is a fan of Saabas’ treeinterpreter library that allows one to compute feature contributions behind every prediction and he goes into explantation of how the method work in his lessons. However I have always been sceptical of the method: although my scepticism is only intuitive. Regardless treeinterpreter wasn’t production-ready in 2016: it was simply too slow for computing contributions in a live system. This resulted in me inventing a different method that is more like permutation method but applied to a single row. The method, also known as leaveoneout, turned out to work quite well in practice: it is fast and has been incredibly useful in pointing out leaky features (since those contribute the most).

Fast-forward to 2019 though and I have stumbled upon shap library. Its author, Scott M. Lundberg, showed in this paper that Saabas’ method is inconsistent:

This means that when a model is changed such that a feature has a higher impact on the model’s output, (inconsistent) methods can actually lower the importance of that feature.

I suspect that leaveoneout is also inconsistent and thus should be abandoned in favor of SHAP values proposed by Scott. In addition, SHAP library is production-ready as the library is very fast. SHAP feature importances are backed up by Shapley value solution from game theory and thus have a bunch of nice properties as a result.

Kudos to Jeremy for not even mentioning the .feature_importances_ attribute of Random Forests. Carolin Strobl has shown those to be rubbish.

What’s new for me:

One idea that I came up with was to examine the predictions paths of decision trees. Perhaps validation set ends up in leaf1 10% of the time whilst training set hits leaf1 only 5% of the time. The resulting software package, which I named NodeProp points out feature drifts quite well but has many false positives: I get the impression that my algorithm still needs some tweaking for it to be more robust. Unfortunately I no longer have access to the source code and thus can’t tweak it.

How does Jeremy deal with this issue?

He creates a new target variable is_validation_set and sets to True for validation and False for training subsets. Then he trains a random forest and examines which features are the most important. Ideally one shouldn’t be able to predict what is in the validation set and what is the training set. However if it is possible, it is crucial to examine which features allow such prediction. I find this technique to be ingeniously simple!

“Trick” 5: Make sure your validation set generalises to production.

Imagine the blissful moment when, after all the data extraction and preprocessing, you finally have all the data prepared and ready for modelling - and you start playing around with various models, features and hyperparameters. But wait, you are still having doubts whether any of this work will generalise to production. After all, what works offline often doesn’t work once deployed, as you probably have learned from experience. How do you gain more confidence in deploying your own models? I have developed a habit of manually inspecting a few predictions before deploying anything to live: however such process1 is far from rewarding. Jeremy advocates building 5 completely different models and making sure that their performance aligns monotonically. So the top model on validation should be the top model in production. The second best on validation should be the second best in production and so on. This way one can be sure that the performance on the validation generalises well into production. One must trust their validation set to be representative before optimising the performance on it (duh!).

I have thoroughly enjoyed watching just 2 lessons and I can’t wait to watch more material by Jeremy Howard. Another meta-lesson is how much of practising data science consists of learning various techniques rather than just learning how to code against API provided by sklearn. This is a reminder to myself to keep watching educational videos and keep learning from other practitioners. And I hope to blog about what I learn more often :).

P.S. special thanks to Hiromi Suenaga for her excellent notes.